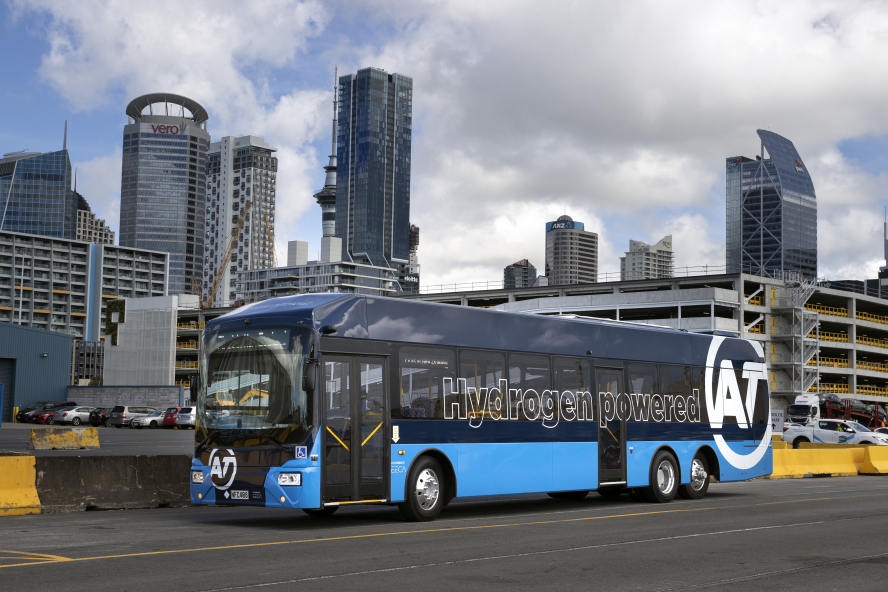 Hydrogen fuel cell (HFC) technology offers such an alternative and aligns well with the Ministry of Business, Innovation and Employment’s 2019 hydrogen green paper.

AT partnered with Ports of Auckland on a hydrogen demonstration project to understand the operational performance and emission reductions from hydrogen-powered buses. It ordered Australasia’s first ever HFC bus, and a two-year operational trial began in April 2021.

The trial is co-funded by EECA, Waka Kotahi and Auckland Council. Ports of Auckland is the refuelling partner. Howick & Eastern operates the bus for AT.

Since July 2021 the HFC bus has been used in full passenger service on the high-frequency number 70 route from Howick to Britomart in Auckland, in parallel with a diesel and a battery electric bus of similar sizes and axle configurations. This enables comparisons of the three technologies’ operational performances and operating costs.

In the short time from its launch to the end of 2021, the trial has provided a variety of benefits, including zero operational CO2 emissions.

The data so far indicates the one trial bus could result in an average annual reduction of 7.3 tonnes of CO2e. Replacing the 12 per cent of services that can’t be operated by battery electric buses could reduce emissions by 10,373 tonnes.

Auckland’s recorded CO2 emissions were 86,443 tonnes in 2020/21, and its population is projected to reach 2.3 million by 2043. There is an urgent need to accelerate public transport service improvements, including sustainability and inclusivity as essential aspects of growth.

The HFC bus initiative shows New Zealand can be a driver of change in the world’s use of rapidly transforming modes of sustainable transport technologies. It increases the country’s competitiveness in developing hydrogen fuel cell propulsion systems and puts it amongst the global leaders.